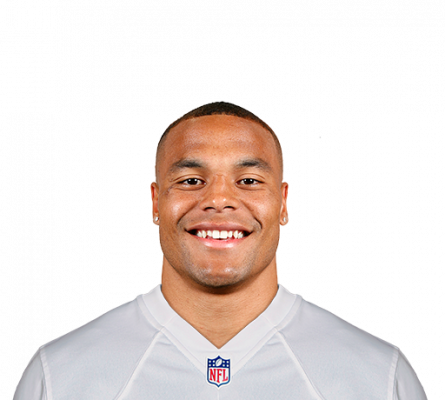 With their eyes toward the future, the Dallas Cowboys picked Dak Prescott out of Mississippi State with the team’s second selection in the fourth round (135th overall) of the 2016 NFL Draft. The move was a rare one for Dallas, as Prescott became the first quarterback drafted by the Cowboys since Stephen McGee in 2009, and only the fifth in the common draft since Jerry Jones bought the team in 1989. Prescott, considered the most decorated player in Mississippi State history, was slotted as Dallas’ third quarterback when training camp opened. Midway through camp, a leg injury to

Kellen Moore put Prescott as the backup to Romo, but that was short-lived as Prescott was thrust into the role as the club’s starter after Romo suffered a back injury in the preseason game at Seattle. Prescott took the opportunity and ran with it. After losing the season opener, Prescott led the Cowboys on a club-record 11-game win streak en route to a franchise-tying 13-3 record and the NFC East Division crown. Along the way, Prescott set club rookie records with 3,667 yards, 23 touchdowns and only four interceptions on 311-of-459 passing (67.8%) for an NFL rookie record 104.9 quarterback rating while becoming the first quarterback in NFL history drafted in the fourth round-or-later to start all 16 games as a rookie. He also became the first rookie quarterback in team history to be named to the Pro Bowl and the first to win AP Offensive Rookie of the Year. Prescott enters 2017 entrenched as the club’s starter and looks to build off a highly successful rookie campaign to solidify his role as the franchise quarterback for years to come.