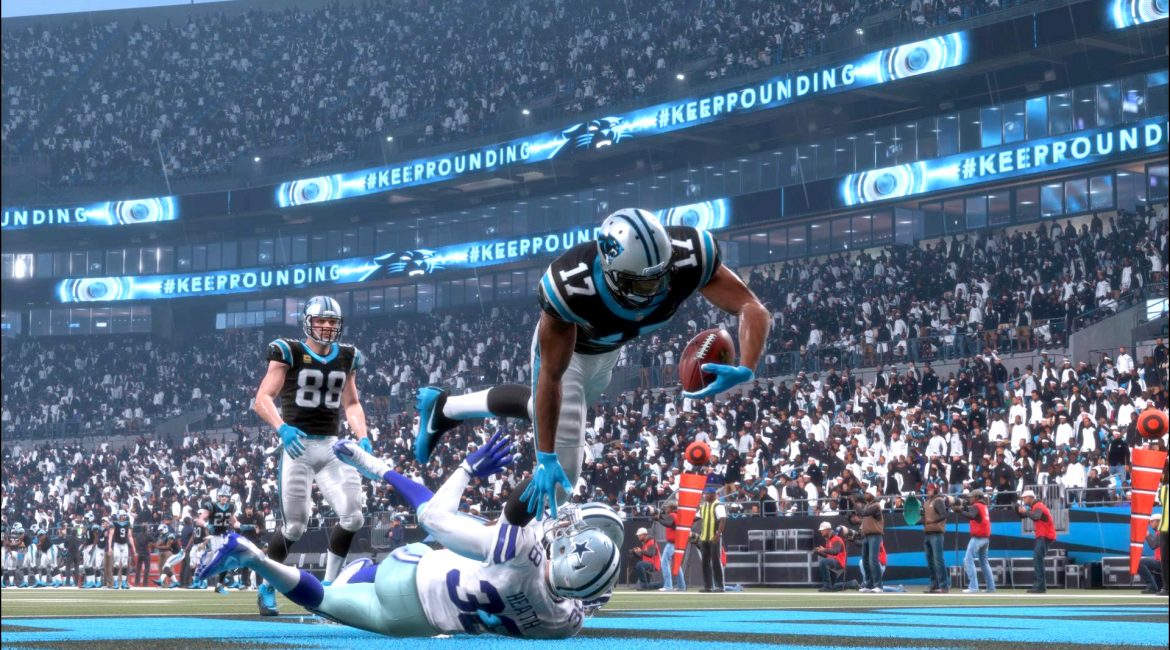 Charlotte, N.C. —  It was a soaking wet opening night for the Dallas Cowboys and the Carolina Panthers, the rain seemed to affect both teams in Sunday’s first Game Of the Week. Neither team was able to get anything going for much of the game.

Once the both teams got on the board however, it looked like the game would be a shootout with both putting up scores early on in the first quarter. But, after that both offenses struggled to move the ball with any consistency. In the first drive for the Cowboys it looked like Ezekiel Elliot was going to have a huge game, he was busting through tackles on his way to a touchdown on a 24 yard screen pass to get them started, but the extra point was missed and that was a sign of things to come for their offense.

The Panthers defense would settle down and keep Elliot in check the rest of the game. “I’d be lying if I said i wasn’t worried after that first drive, once Zeke gets going to hard to stop it most of the time. He’s the lifeblood of that team and they love going through him for offense, we made some adjustments on defense and tried make their below average receiving core try and beat us. I’m happy with how we responded, overall a great day I’d say.” said Panthers head coach, Mark Miller.

The defense sure did settle down because after that first drive it was a strict #NoZeke zone, they would hold him to under 100 yards of total offense for the day. They harassed Dak Prescott all day and never let him or the offense get into a rhythm, the defense would end up with a tremendous showing, 4 sacks 2 turnovers and allowing less than 300 yards in the game, RE Mario Addison led the team with 6 tackles, and Julius Peppers added to his amazing career by getting yet another sack to bring him up to 155.5 and only 4 away from passing Kevin Greene for 3rd on the All Time list.

The Panthers would fire back late in the first quarter with Cam Newton finding Christian McCaffery running over the middle for a nice 24 yard touchdown pass. He also added 11 carries for 39 yards with a touchdown and was a big part of helping them keep possession and limit the Cowboys chances to come back. After that score they would trade punts with the occasional field goal here and there until the half.

After the half the Panthers came out and completely overpowered the Cowboys. After a bad decision by Tavon Austin on a punt, Dallas found themselves on their own 1 yard line and needing a score to keep themselves in the game. As soon as the ball was snapped Dontari Poe blasted by all pro Travis Fredrick, who maybe is still feeling the effects of Guillain-Barré syndrome a rare auto-immune disease, and was able to bring down Elliot for the safety.

The next drive for Carolina looked like they were going to score to add to their lead, and on a 3rd and 4 from the Cowboys 8 yard line they called their rookie first round picks number, Moore broke into the middle of the end zone on a slant,  wide open and Newton delivered a strike, but the rookie dropped it. Panthers wide receiver D.J. Moore ended the night with only 1 catch on 3 targets for 6 yards to go along with 2 drops maybe it was the rain, maybe it was the adrenaline of this first game, but either way those drops have to go or else hell find himself slowly falling down the depth chart. “I played a pretty bad game.” Moore said “I pride myself on being able to catch good balls that are thrown to me, I’m not going to make any excuses, just going to continue working hard and get better every day,  because I got a lot of work to do if I want to get on (Devin)Funchess level, did yall see that catch he made!?!?!”

Yes, yes we did see that Catch he made, Newton threw a beauty in between the corner and safety and SOMEHOW Funchess was able to haul it in without dropping it, it was quite an amazing play and it pretty much put the game out of reach in the 4th. Mccaffery would later add a touchdown on a 33 yard run to help the Panthers salt away the game and come away with an opening day win and send the fans home happy, for the first of many (hopefully) home victories.

It won’t get any easier next week as the Panthers go on the road next week to take on Julio Jones, Matt Ryan and the rest of the  Atlanta Falcons.